this American Sentence was inspired by the outraged reaction of someone (in the 1st of the following paragraphs), after I said that losing 35 lbs. (safely) would be difficult and it would take months

Before Crohn’s disease began controlling my diet, I used to host a yearly nutrition and exercise challenge. I stopped when what I ate (and how I ate it) became too specific to me to work well for another—not without serious tweaking. Then, last week, a friend sent me this: “I’m freaking out. The doctor says I have colitis, food I’ve always eaten makes me sick now, and I can’t fit in my fat pants. Help!”

My friend, Mr. Drama Queen, has a long history of not sticking to anything involving him having to give up something he likes. If you’ve been reading me for a while, you might remember him as the guy who asked me to give up coffee for a year in order to keep him company while he gave up smoking. I went a whole year without my magic brew, just to find out that he kept puffing when I wasn’t looking.

I was tempted to remind him about his quit smoking fiasco. But just hours after I got his message, my Boy called me to say, “I am fat.” My sweet Boy sounded so dejected (and dumbfounded, by the fact that too much eating and too little exercising was affecting his weight) that I burst into laughter. I know… I am a terrible woman. Then, the next day, my big Brother messaged me to say that his blood pressure was too high and his belly too big and he really needed to lose weight.

Since my Crohn’s is currently stable, and 3 people in my life wish to improve their eating and exercise habits, and since I could lose a pound or 19, I thought it was time for another food and fitness challenge. I’m calling it “13 31 Weeks of Pseudo-Intermittent Fasting; or, Bring on the Bone Broth”. And I’ll tell you all about it in future posts. 😉 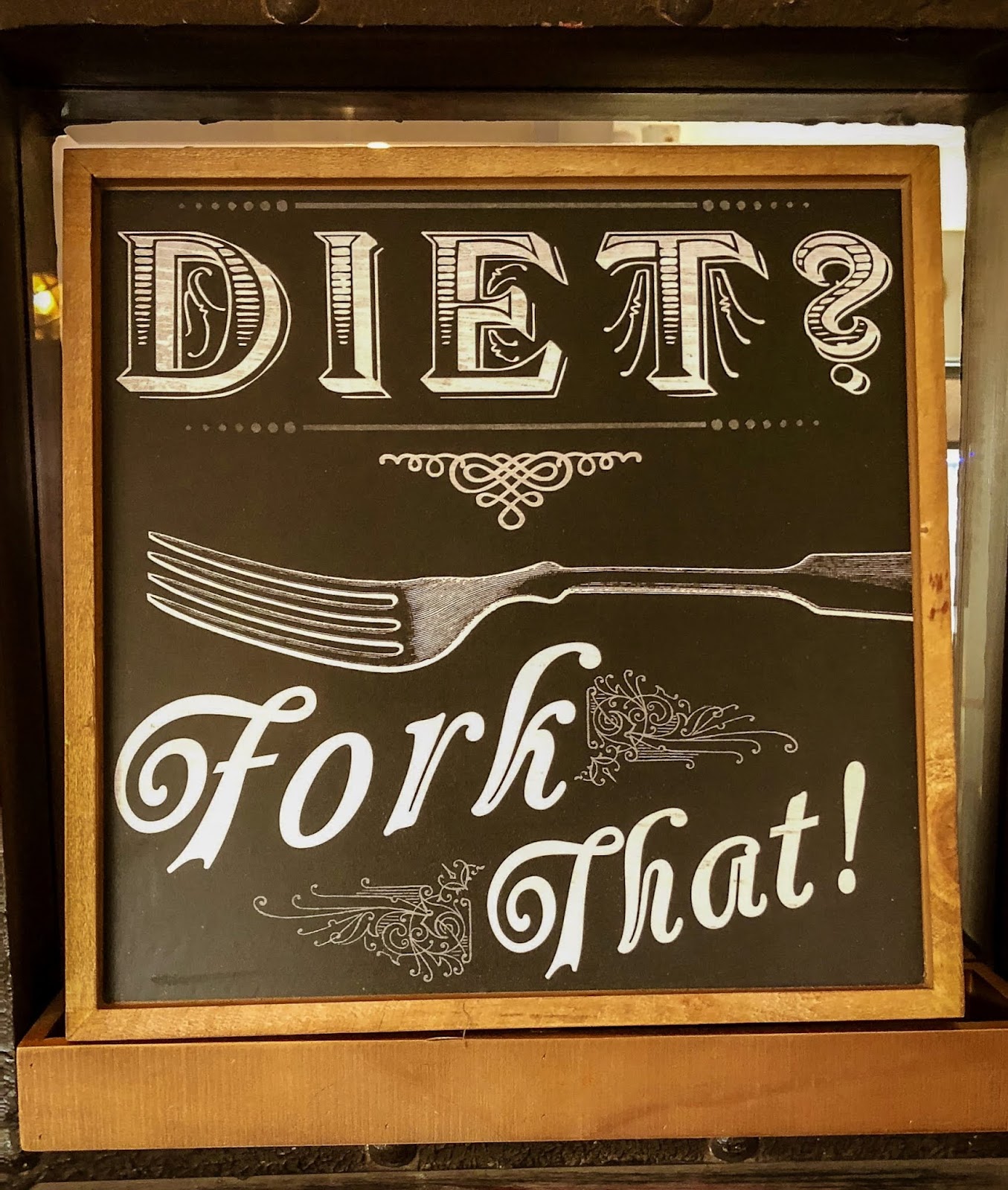 photo by Nick Fewings, on Unsplash

- for Poets and Storytellers United--Weekly Scribblings #85: “Take care of your body”.

First Storms and Then Rainbows

This wasn’t the first time he had stormed away fuming, after she refused to cuddle the weakling beast that was his ego whenever she disagreed with him. But as she watched him walk towards his car, carrying the last of his things out of the old cottage that used to be their home, she knew that it would be the last time. She followed him outside barefoot, her soles welcoming the soothing touch of recently rained on soil.

Turning around to look at her, he said, “Professor Bain might not share your ‘cripples, fags and chicks are so very oppressed’ opinions, but the man is beyond brilliant where it counts. And he would have seen my potential, if your mouth hadn’t shat on every chance he ever gave me.”

“I suppose prejudice, hatred and brainlessness can look like brilliance when it fits your views,” she said, wondering if she would ever be able to explain to her brain why she had shared her time and her body with a bigoted stranger for three years.

He got in his car. But before driving away, his gaze sizzled in her direction. “You can’t open your mouth without letting the whole world hear just how naïve you truly are. What you call ‘prejudice’, the rest of the us know as reality. You better get with the program, my dear, or no one who matters will ever take you seriously.”

As his car disappeared around a corner, disenchantment and rage blurred her vision before spilling down her cheeks. She looked down, blinked hard, and felt a few tears fall on her feet. She took a deep breath and wiped her face with the back of her hand. When more tears came, she let them rain, thinking, First storms and then rainbows. 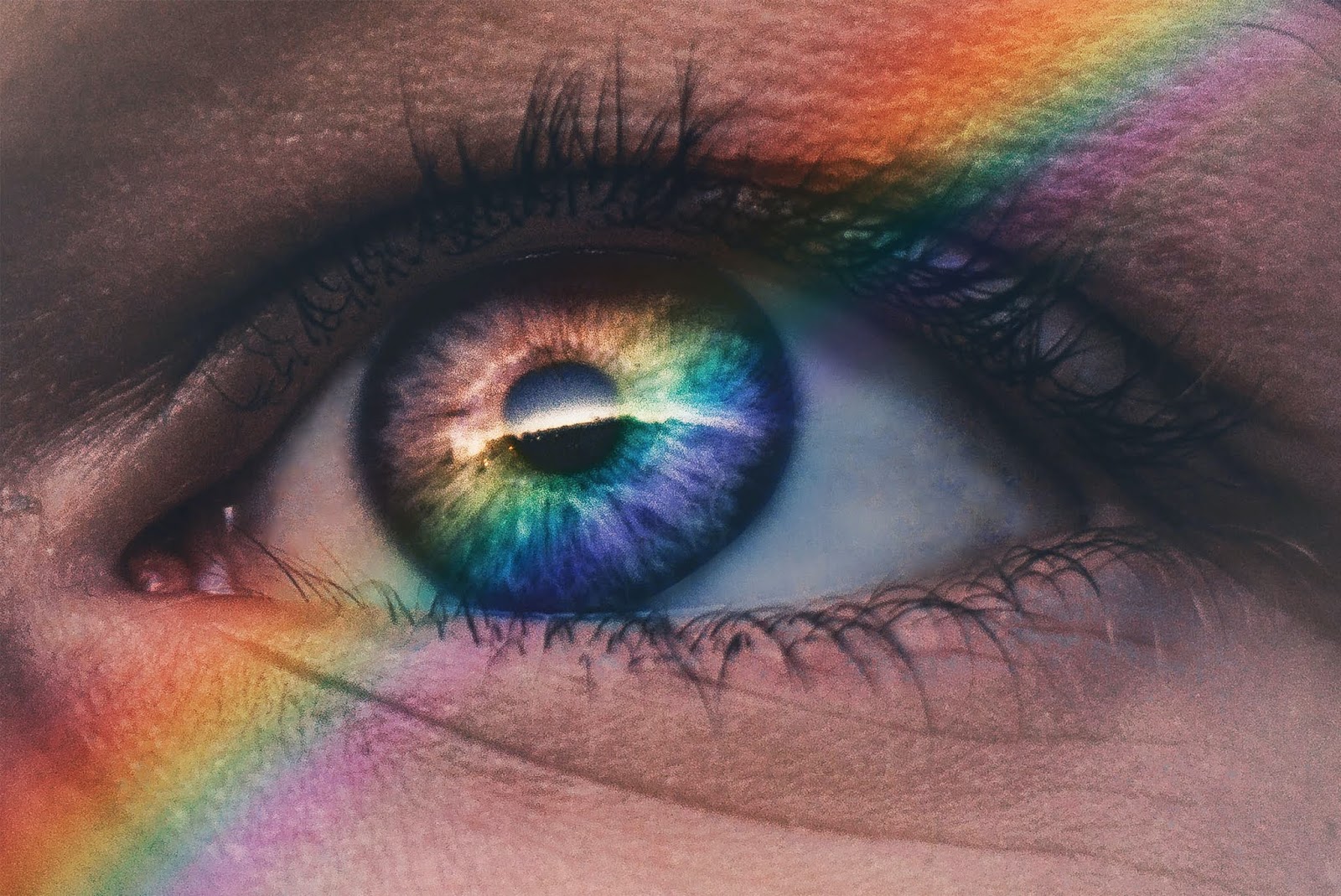 photo by Harry Quan, on Unsplash

- the first draft of this story, which I shared in 2014, was written in the first person point of view. The original story had three characters, and they all had names. I feel rewriting her on her own, to confront him, makes her (and the story) a tad stronger. The same feels true (to me *cough*) about the anonymity; omitting the characters’ names leaves more focus for the plot, methinks.

- for Poets and Storytellers United--Weekly Scribblings #84: The Last Time and Writers’ Pantry #85: Things to remember if you’re not rich and famous yet.

When the odd summer breeze kisses
my skin with susurrations of chill,
I slow cook the sun (for warmth).

I cube kabocha squash
and boil it in bone broth
(for 13 minutes).

While the broth does its thing,
I slow roast some
pestled and mortared pecans.

I blend the softened sun,
pour the liquid gold
into a bowl,

and sprinkle the yum
with still hot toasty nuttiness
(for crunch). 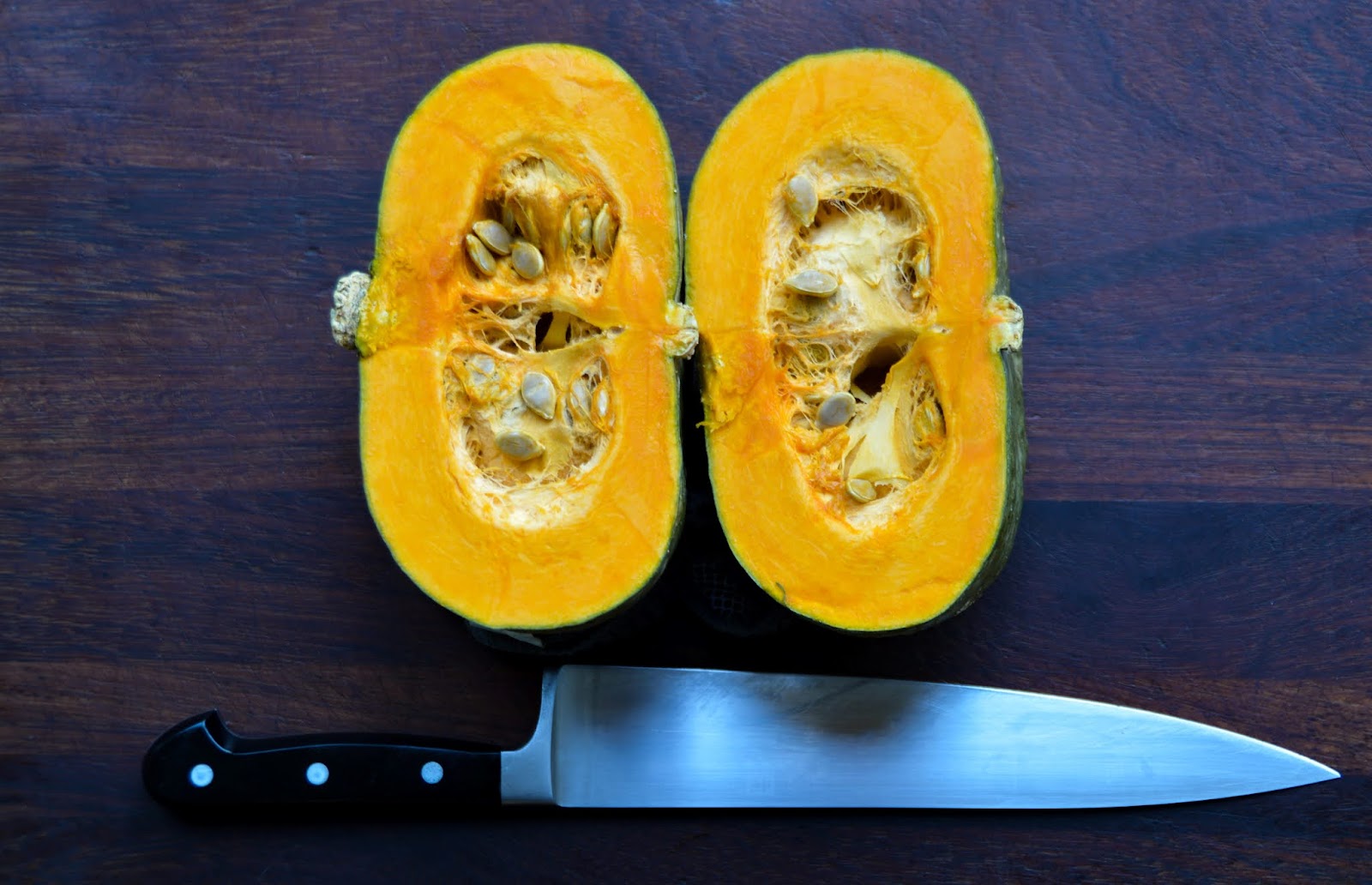 photo by henry perks, on Unsplash

- for Poets and Storytellers United--Weekly Scribblings #83: Pay Attention, where we’re asked “to choose one object in nature, examine it closely, letting it inspire in [us] a sense of wonder”. I chose the kabocha squash in my fridge and wandered into soup. Also linked to the Writers’ Pantry #84: Let’s Read Up a Storm.

Her knife was deep in his belly. His eyes were wide. She pressed her body closer to his, twisted the blade, and his dying breath warmed her face.

She pulled out the blade and stepped back, but the body just slumped against The Tree. The others had been swallowed by the trunk as soon as she spilled their lives. “Why are you still here?” she said to the corpse.

You must open him for me, Victoria, a gleeful voice whispered into her mind.

She stared at the bloodied blade in her hand, and said, “I just did that.” She knew that letting her temper taint her tone was a mistake, but she couldn’t stop it. “What else do you want from me?”

I want his blood, his flesh and his bones, my Victoria.

Killing for The Tree was the only way she knew to hold on to her memories and save her friends. Because of it, she had learned not to dwell too much on the death of anyone who had tried to kill her first. Killing to survive felt fair; still, some lines couldn’t be crossed without losing one’s self. So, she made her choice: she would give up her old life, her home, her grandmother’s smile… but she would keep what was left of her humanity.

“My name is not Victoria,” she said to The Tree. “And I’m not your anything.”

She sheathed the blade in her boot, and dragged the man away from The Tree. “All wars suck,” she said to the body, as she covered it with leaves. “I am done.”

Moments (or maybe lifetimes) later she found herself in the woods, standing in front of a mound of dry leaves covered in wildflowers. But she couldn’t remember why. A tree, its trunk depicting faces screaming in agony, grew crooked by the side of a bright trail.

She knew nothing about the place or herself, but walking away from the tree felt right. 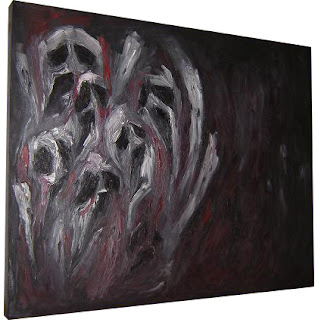 - partly inspired by this quote, from Terry Pratchett’s Monstrous Regiment: “Perhaps that’s why men did it. You didn’t do it to save duchesses, or countries. You killed the enemy to stop him killing your mates, that they in turn might save you…”

- for Poets and Storytellers United--Weekly Scribblings #82: “War is over! If you want it.” and  Writers’ Pantry #83: It’s Spooky Time Somewhere.

“Instructions for living a life:
Pay attention.
Be astonished.
Tell about it.”
~ Mary Oliver

I delight in overcast skies that free me to garden without the weight of a hat. I revel in perils I have overcome, without which I wouldn’t have grown as adept as I have at the art of rejoicing in the small (giant) magics life gives me when I open eyes and heart (and see). On this gray morning, I am grateful for a Universe that teaches cloudy skies aren’t just a shrouding of sunlight but a chance to cool down... open eyes and heart wider... and be astonished by all Nature offers to all.

it blushes
so prickly crimson,
my cactus 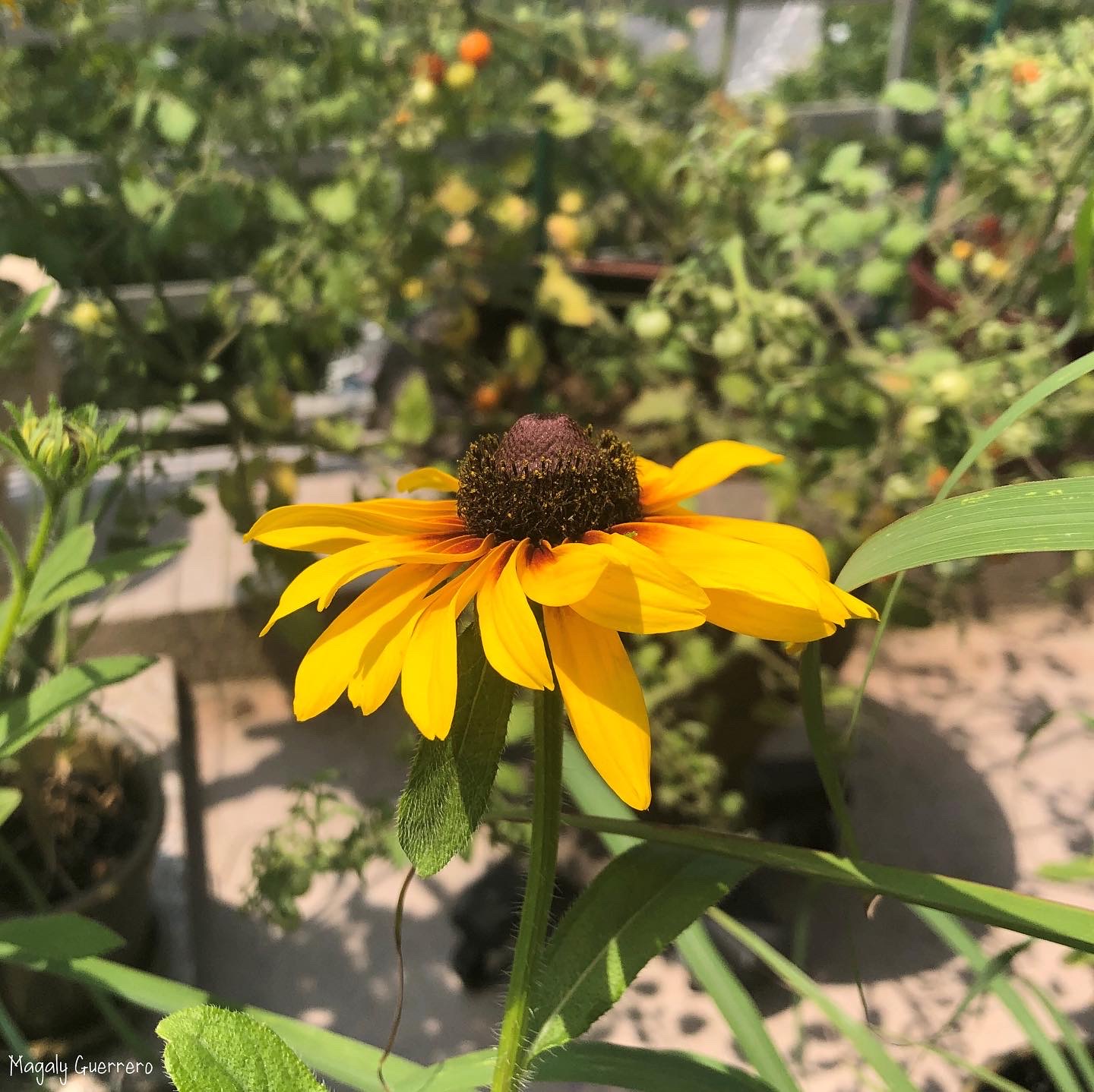 7/24/2021: Not very long ago, I learned that black-eyed Susans are also called “gloriosa daisies”. These stunning bloom (which my mind’s eye has always thought of as the lovechild of a coneflower and a sunflower) is known by many names: brown-eyed Susan, yellow daisy, poor-land daisy, golden Jerusalem, brown betty, English bull’s eye, and yellow ox-eye daisy… But gloriosa daisy is my very favorite. 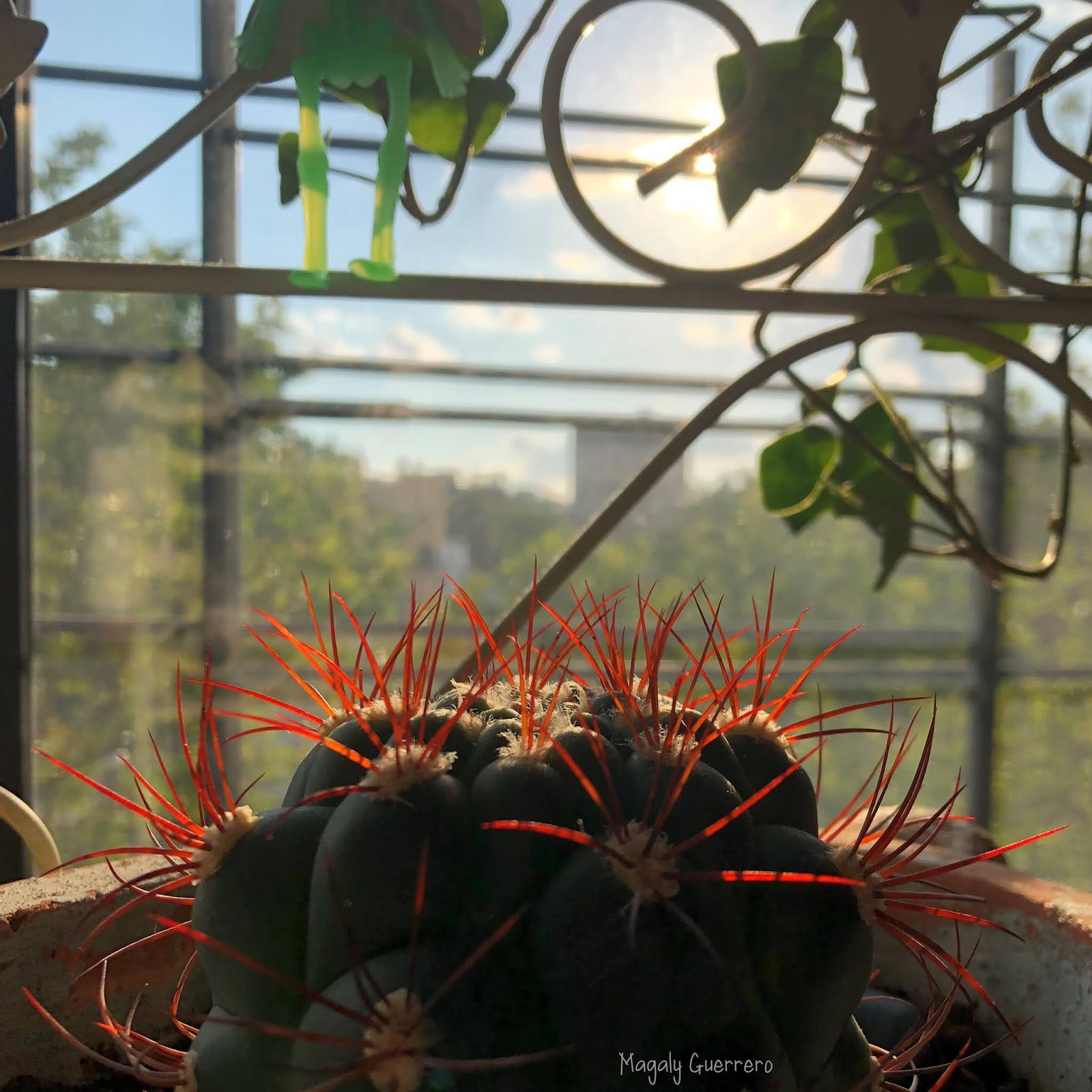 7/31/2021: Some might say that social media takes away from “real life”. I won’t argue with the notion—everyone should be allowed (and willing) to believe their own truth(s). But for me, social media helps accomplish some of what Mary Oliver’s poetry suggests at the beginning of this post... particularly for those of us who can’t get out as much as we would like.

- for Poets and Storytellers United--Writers’ Pantry #82: Here in My Car.